And these are not all the good factors. The important is the making of Greek Yogurt the authentic way, by straining out the liquid whey until it's perfectly rich and delicious.
So, if you're looking for something tastefull and healthy, want a new way to add creamy flavor to your daily cooking, or you're looking for a new kind of diet, you may just want to go Greek Yogurt. 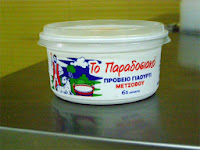 True Greek yogurt traditionally includes some expensive equipment and process of straining a bit part of the water inside, so the final product has a greater concentration in protein than the normal yogurt.
There is no legal patent for the name "Greek" yogurt so multiple companies have found cheaper ways to produce yogurts with similar texture and taste and still get away with calling it Greek, or Greek-style yogurts. They follow a much cheaper way by adding milk protein concentrates (MPCs), whey protein concentrates (WPCs) as protein-enhancing fillers and thickeners like gelatin or modified cornstarch to traditional yogurt.

Finally Greek Yogurt is available now in many regular grocery stores and markets; inside the dairy section. You'll probably see a wide varietiy being sold. Don't be afraid, they all are  good options -- just make sure you pick a low or non-fat Greek Yogurt Variety.

Posted by Unknown at 6:52 PM No comments: